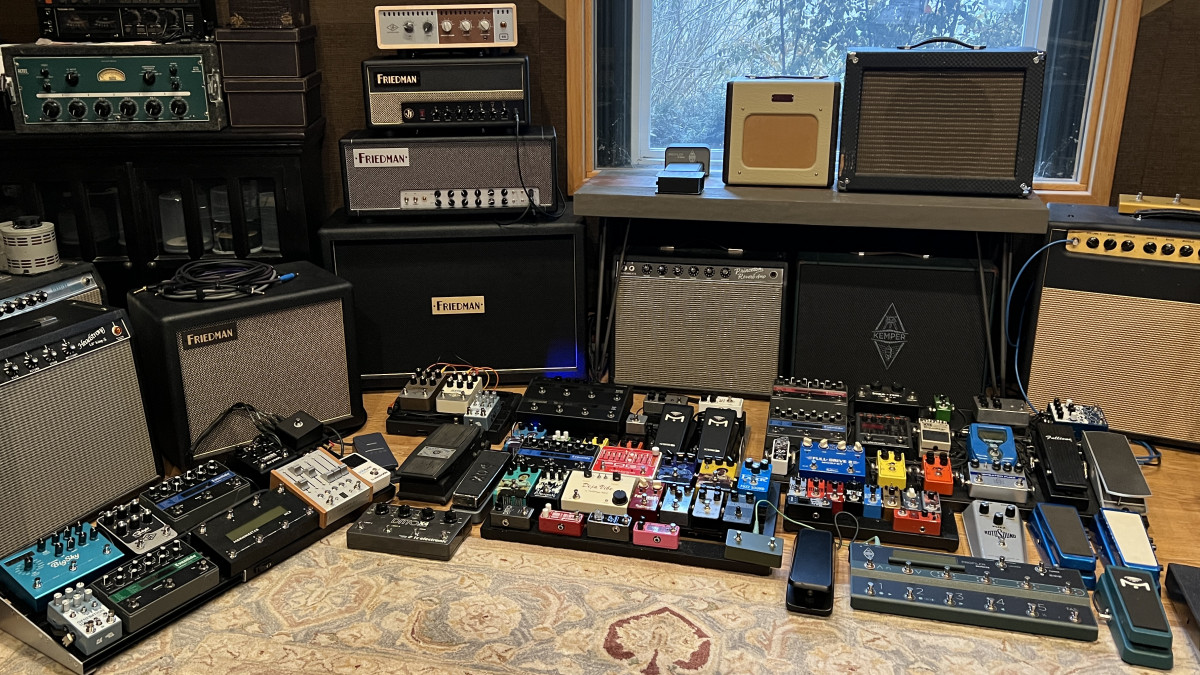 What's the state of the stomp? Learn about the background and get some insight into the future of foot pedal design and use.

How Did We Get Here?

It was featured prominently by Keith Richards of The Rolling Stones in “(I Can’t Get No) Satisfaction”, recorded May 12, 1965 at RCA studios in Hollywood, California. This was a huge development in the music industry at the time, the compact dimensions of the pedal allowed for easy portability and easily access to making audio signal connections. Before this, guitar effects were created by adding different recording equipment such as reel to reel tape recorders (Echoplex and Benson Echorec) into the guitar’s signal chain and finally fed into the amp. It’s important to remember that early vintage amps did not have effects loops or other external routing capabilities. This pedal was the first to offer this effect in a portable, easy to use and affordable package. The Fuzz-Tone FZ-1 is considered to be the first "guitar effects pedal" and is widely acknowledged as a precursor to the modern guitar effects pedal market.

The wah-wah pedal (also introduced in the 1960s) and is used to create a "wah" sound by filtering the guitar's tone. The pedal works by the player rocking their foot back and forth which sweeps a narrow band-pass filter’s peak response up and down its frequency range to create a distinctive “cry”. This effect in essence mimics the “cry” technique widely used by big band trumpet and trombone players who placed the rubber end of a plunger over the bell end of their instruments and by flicking their writs, could achieve a timbral result that mimicked the sound of a baby crying.

The first commercial wah-wah pedal was the Vox Clyde McCoy, which was introduced in 1967. The pedal was designed by Brad Plunkett and was based on the circuit of a tone-bending fuzzbox he had designed for the Thomas Organ Company. The pedal quickly became popular with guitarists, and many other manufacturers soon released their own versions of the wah-wah pedal.

It's also worth mentioning that certain types of pedals may include additional components such as LEDs, Multiple footswitches, or expression pedals, which are used to control different parameters of the effect in a more dynamic way.

2. Fuzz Face: The Fuzz Face is a distortion pedal that was first produced by Dallas Arbiter in the 1960s. It's known for its thick, gritty, and harmonically rich sound and has been used by guitarists such as Jimi Hendrix, Eric Johnson, and David Gilmour.

3. Big Muff: The Big Muff is a fuzz/distortion pedal that was first produced by Electro-Harmonix in the 1970s. It's known for its harmonically rich sustain and creamy distortion tone.

4. The MXR Dyna Comp a popular pedal that has been around since the 1970s. It's known for its ability to even out the dynamic range of a guitar signal, making the quiet parts louder and the loud parts quieter. This helps to create a more consistent and polished sound, and can be especially useful for clean and solo guitar playing.

5. Tube Screamer: The Tube Screamer is an overdrive pedal that was first produced by Ibanez in the 1970s. It's known for its smooth, warm, and natural-sounding overdrive tone.

6. Cry Baby: The Cry Baby is a wah pedal that was first produced by Dunlop in the 1966. It's known for its expressive, vocal-like wah tone and has been used by guitarists such as Jimi Hendrix, Eric Clapton, and Eddie Van Halen.

7. Pro Co RAT: The Pro Co RAT is a distortion pedal produced by Pro Co Sound in the late 1970s. The pedal is known for its hard-clipping distortion and it has been widely used by guitarists like Matt Bellamy from Muse, John Scofield, and Kurt Cobain from Nirvana.

8. The Nobels OD-1 is a classic overdrive pedal that features a simple control layout with knobs for Level, Drive and Tone. Based on the classic Ibanez Tube Screamer, the OD-1 is known for its warm, natural, and transparent overdrive sound that is well-suited to a wide range of musical genres.

9. The Klon Centaur is a boutique overdrive pedal that was first introduced in the 1990s by Bill Finnegan. It was in production from 1994 to 2009 and is known for its unique and highly sought-after tone, which is characterized by a transparent and dynamic overdrive sound that preserves the characteristics of the guitar and amplifier while adding a subtle harmonic complexity.

10. Analog Man’s King of Tone: is a boutique overdrive pedal that was created by Mike Piera of Analog Man Pedals. Designed to replicate the sound of vintage tube amplifiers and is known for its warm, natural, and transparent overdrive sound. The pedal features two channels, one that is based on the classic "Tube Screamer" circuit and another channel that is based on a modified version of the classic circuit. The two channels can be used together or separately, giving players a wide range of tonal options.

These are just a few examples of the thousands of great overdrive effects pedals (I'm not even getting into time-based or modulation-based effects) that have become famous for their unique sounds and wide use.

Modern Design and the use of MIDI:

Modern foot pedals, such as overdrive, distortion, and delay pedals, can be used in conjunction with MIDI (Musical Instrument Digital Interface) technology to expand their capabilities and functionality.

One way that foot pedals can be used with MIDI is through the use of a MIDI controller pedal. These pedals allow the user to send MIDI commands, such as program changes or control changes, to other MIDI-enabled devices, such as a digital audio workstation (DAW) or a MIDI-enabled amp or effects processor. This allows the user to remotely control various aspects of their setup, such as switching between preset sounds or adjusting the parameters of an effect.

Increasingly most modern pedal builders, make their pedals with built-in MIDI functions, meaning that they can be controlled by a MIDI controller or a computer via a DAW, allowing to change presets, control parameters and even synchronize with other devices or software.

Some are quite advanced. The Chase Bliss Audio Preamp MKII is designed to provide a wide range of tonal options, from clean boosts to vintage-style distortion.

One of the key features of the Preamp MKII is its three-channel design. Each channel has its own set of controls, including gain, tone, and level, which allows the user to easily switch between different sounds and settings. The pedal also includes a mid boost switch with sweepable mid EQ, which provides additional control over the midrange frequencies.

The Preamp MKII also features a built-in expression control, which allows the user to adjust various parameters of the pedal in real-time. This can be used to create swells, or to adjust the gain, tone, or level of the pedal on the fly. But the best part is that all of these parameters are MIDI programmable! And allows for remote control of the pedal's settings via MIDI commands.

This pedal is not a unicorn. Strymon, BOSS, Empress, Red Panda, Meris, Eventide and many more continue to implement MIDI functionality in their designs.

But Should They Stay On The Floor?

Using foot pedals in place of outboard gear is a popular technique among guitar players and other musicians. On the positive side, they are compact and portable, making them easy to use and transport. Foot pedals can be easily switched out and replaced with other pedals to achieve different sounds and effects thus allowing for quick and easy creations of effect chains for different sounds. They are also generally a fraction of the cost of dedicated outboard gear. Additionally, some pedals offer multiple functions in one unit, so you can have different effects in a single pedal, rather than having multiple outboard gear which can be costly and take up space.

The downside is worth noting as well. While foot pedals can be a great alternative to outboard gear, they may not always offer the same level of versatility and/or sound quality. Impedance is also an issue as the majority of foot pedals are expecting instrument level and will need to be stepped down from line level to instrument level in order to work most efficiently.

Regardless of the limitations mentioned before, I think the future of foot pedals see a continued focus on innovation and the integration of new technologies. As digital technology continues to advance, we may see more pedals that incorporate digital processing, allowing for more complex and versatile effects. This could include the use of software-based effects, such as convolution reverb, as well as greatly expanding the ability to edit and store multiple presets.

We may see even more integration with digital audio workstations (DAWs), mobile devices, and other digital devices, allowing for greater control and flexibility in the studio and on stage. Pedals are already becoming more customizable, with many now featuring expanded control sets and the ability to edit and store multiple presets as well as the ability to create custom effects chains on the fly and/or the ability to control multiple pedals at once.

Perhaps the most interesting area to ponder is integrating AI and machine learning technologies. Imagine pedals that can learn and adapt to the user's playing style and preferences, providing personalized sounds and effects.

Of course, predicting the future is always uncertain and this are just some possibilities of what might happen, it's important to note that the future of the pedal industry will likely be shaped by the needs and preferences of musicians and audio engineers, as well as by advances in technology.